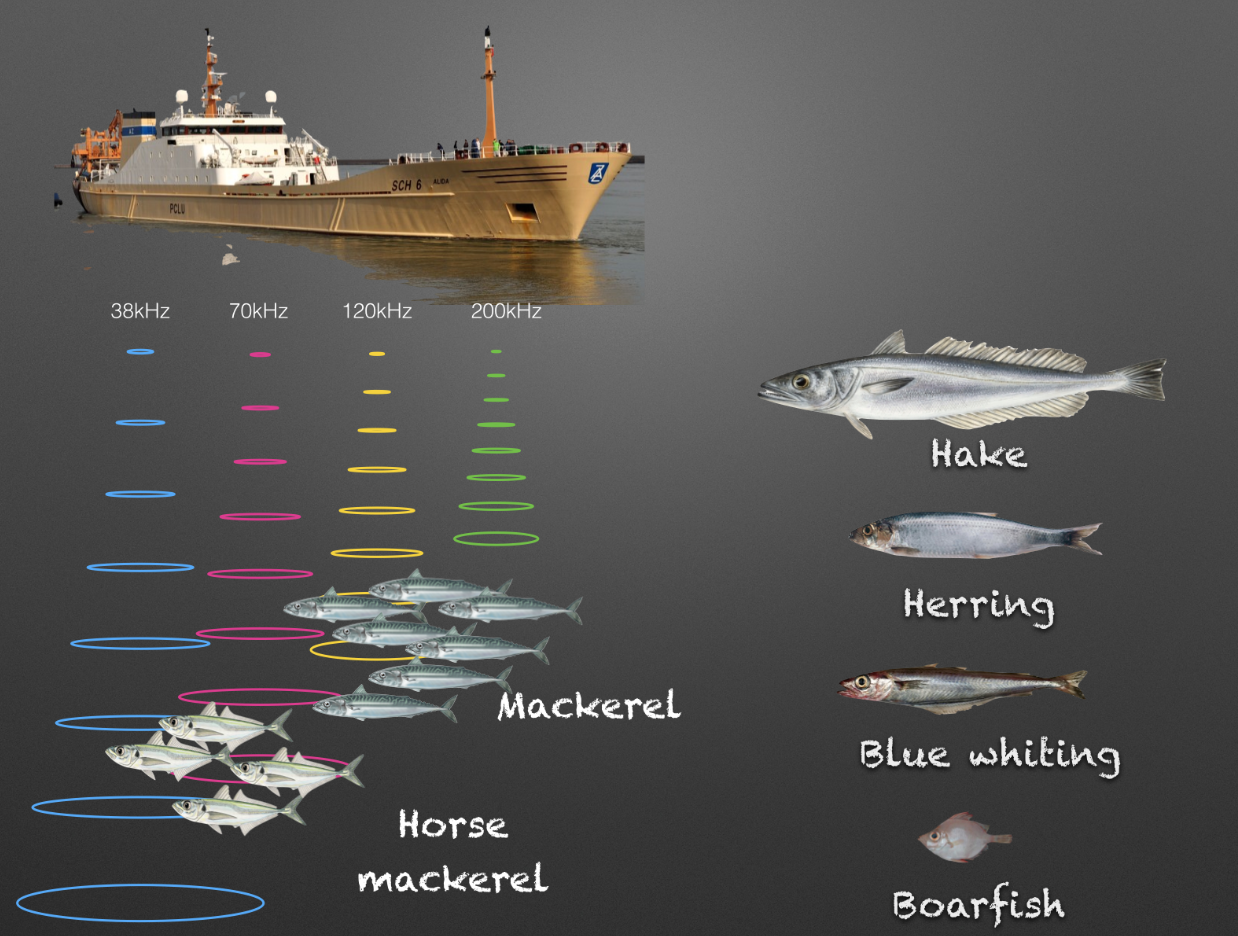 The main purpose of the preceding project (SEAT I) was bycatch avoidance of mackerel in the European horse mackerel fisheries. The success of the project has been described in the progression report that was published in June 2014 and final report that will be available from February 2015. The first phase of SEAT can be seen as a feasibility study on identifying clean schools of mackerel from horse mackerel with the use of echosounders.

The main purpose of this project is to further develop SEAT into a practical tool for skippers in Dutch pelagic fisheries. SEAT I has proven the concept, but practice showed that there are a few unforeseen factors that make SEAT not always successful in practise.

To this end, during the first phase of the SEAT project we have identified a number of improvements that are necessary to develop SEAT into a tool useful for the skipper in practice. Those suggested improvements are logically the results that need to be achieved in this second phase:

Key learning points of SEAT I and key objectives of SEAT II:

Cornelis Vrolijk Holding B.V.
Cornelis Vrolijk is a family company which was established by Frank Vrolijk in Scheveningen in 1880. For the purpose of this project, the company prepared their trawler ‘Afrika’ (SCH24) and installed scientific echosounders accompanied with SEAT classification software.

IMARES (Institute for Marine Resources and Ecosystem Studies) is the Netherlands research institute established to provide the scientific support that is essential for developing policies and innovation in respect of the marine environment, fishery activities, aquaculture and the maritime sector.

CMR Computing is a research department for applied research in visualization, data analysis and decision support. It works closely together with industry and government to develop innovative solutions and software prototypes in application areas such as shipping, offshore and fisheries/aquaculture. CMR will have the responsibility over SEAT software development and will provide second line support to the skippers.

CMR and Wageningen IMARES bring in the expertise in implementation of classification algorithms developed by the scientific community. Sustainovate in addition ensures that the above-mentioned technologies are in line with to the company’s business needs and can count on long lasting support from software solution providers. Combination of these two forces can facilitate fishing company W. van der Zwan in achieving its ambition to actively improve selectivity.

Sustainovate is an important Norwegian-Dutch partner for companies in the maritime sector that are looking for practical, sustainable solutions. Such solutions can be software, scientific research, match-making and introducing partners to new technologies and ideas. Sustainovate ensures project management & budgeting, partnership coordination and contributes with substantive expertise in the field of acoustics and fisheries software. 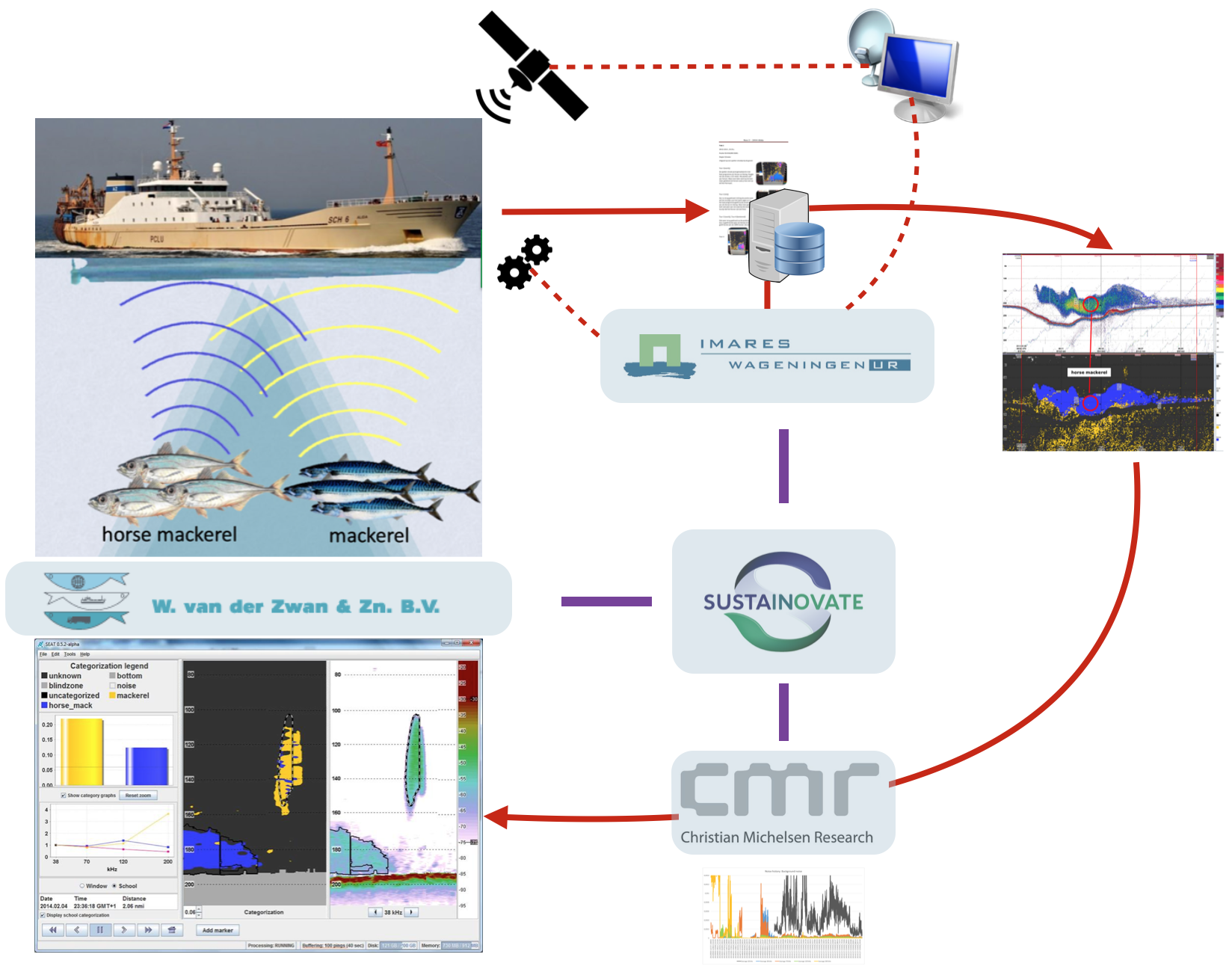 SEAT —> An echosounder signal processor that enables skippers to distinguish pelagic species in areas of co-occurrence.

The team has applied the latest scientific and commercial technologies in multifrequency acoustics and automated species classification to avoid unwanted bycatch during normal fishing operations.
The technology uses the differences in acoustic reflections across the frequency range of echosounders to tell the difference between species. 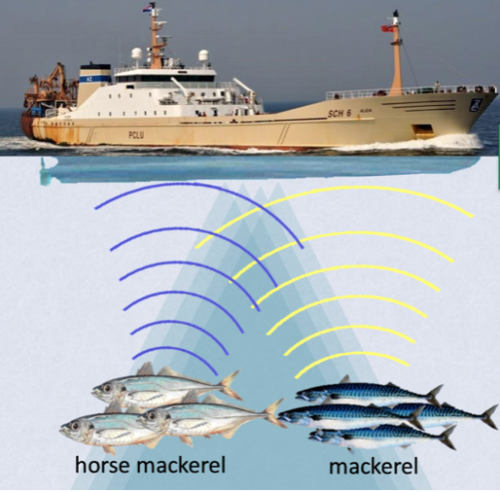 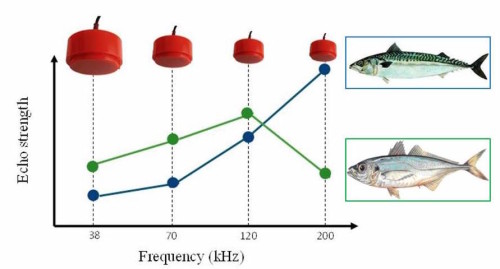 The acoustic identification approach makes use of variations in sound reflection properties at different frequencies between the fish species investigated. Fish with swimbladders, like horse mackerel, usually show less variation in sound backscatter at the four frequencies used. Mackerel has no swimbladder and is therefore generally a weak scatterer of sound. However, mackerel reflect sound stronger at higher frequencies (>100 kHz) compared to lower frequencies. This feature is used here in the development of an identification algorithm for automated mackerel and horse mackerel school characterisation.

Environmental circumstances will affect the acoustic reflections, but things become much more complicated when the schools of fish consists of more than one species. That is where the research part comes into play. SEAT uses reference data from multiple schools, collected by various vessels at various locations and throughout the year to create a more complete representation of the variation of the fingerprints. When you can compare the acoustic fingerprint of a school to fingerprints from other schools you have already caught (and already know what species it where), you can make a prediction on the species composition.

SEAT is trained on schools with single species composition. If however a school consists of two species which are separated in space (e.g. the lower part is mackerel and the upper part is horse mackerel), the school should have two colours in the categorized echogram corresponding to the colours of the species. If the two species are well mixed, the acoustic backscatter and the SEAT result will be mainly influenced by the acoustically dominant species.

Both SCH6 and SCH302 are now collecting acoustic reference data of scientific quality
The SCH6 has undergone significant upgrades of the acoustic system in the 3 year it has participated in the original SEAT project. The EK-series of echosounders lack the filtering the commercial ES-series and therefore pick up all kinds of interference from technical equipment on board. Simply replacing a ES echosounder with an EK-type therefore results in bad quality data that cannot be used. To gather reliable data the complete system needs to be upgraded to a scientific level. On the SCH6 this has taken almost 3 years. Based on this experience the project team has been involved in the installation of the new EK-type equipment on board of the SCH302 and SCH24. We have managed to get the SCH302 up to approximately 85% of the maximum achievable level. The SCH24 is on approximately 75% of that level. Both systems are of sufficient quality to deliver scientific quality data. 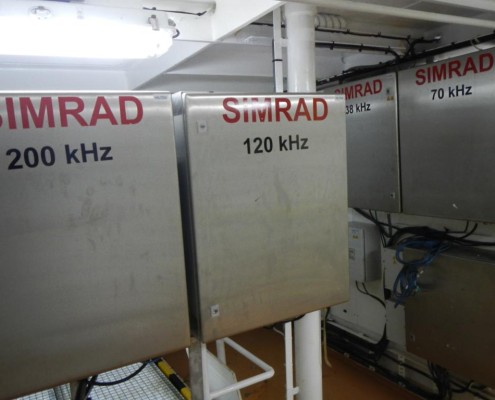 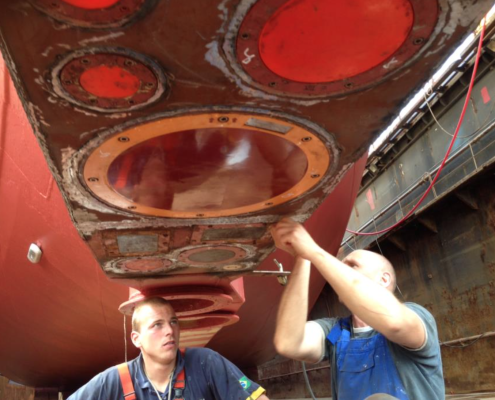 Gained much knowledge on professional installation of acoustic systems.
WNL, Nauteq, IMARES, Sustainovate and vessel crew have worked together on eliminating potential sources of acoustic- and electrical noise, taking the installation on board SCH6 and SCH302 to the required level. This has taken a lot of effort since the scientific installation level is much more exact then the commercial level. The team has built up a wealth of experience in this field. This experience is not readily found anywhere else.

Lesson learned —> Default equipment suppliers are not capable to deliver a technical installation on scientific level. Even the supplier of the scientific echosounders has very limited field experience.

SEAT has been upgraded to be compatible with SIMRAD EK80 data.
SEAT has originally been developed to use data gathered with EK60 type echosounders. This type of echosounders has been replaced with the new broadband echosounders of the EK80 type in 2015. All future installations are expected to utilize this new type of equipment. With the EK80 becoming the new standard and vessel owners starting to adopt the new hardware, SEAT had to be changed in order to be able to process the raw files from this new system. Not only is the format of the raw data files different, but also the amount of data and data files are a tenfold. This means it has a big effect on data collection, data processing and data storage. The SEAT software has therefore required a significant upgrade that has been tested and seems to be working now (januari 2016). This upgrade was not planned for because the echosounder manufacturer (SIMRAD) had failed to inform the SEAT team that the data output would be changed with the transition to broadband possibilities. Upside is that the vessels are now also equiped to collect data for the planned IMARES/TNO Broadband project.

Lesson learned —> We have to realize that SEAT serves a very specific market and that hardware suppliers will most likely not make any effort to adjust their systems to make it directly compatible with SEAT.

Data analysis became much more efficient
Improved data storage infrastructure and data collection logistics have proven a necessity for this project and post-project usage of SEAT. Acoustic data and logbook data now becomes available to project partners in Norway almost immediately after the vessel arrives in port. Logbook data is collected using a mobile app. This technology can be easily transplanted to other vessels and other applications.

Lesson learned —> A professional data collection, storage and logistics infrastructure are a necessity for this project and post-project usage of SEAT. The necessity increases as the number of participating vessel increases.

Software upgrades and support can be done while the vessels are still at sea
A new way has been developed to update the SEAT software. By changing the way these upgrades are performed, the updates can now transferred using the standard satellite connection. This enables the vessel to test an updated fingerprint as soon as it is created instead of having to wait for the next return to port.

Lesson learned —> When vessels do trips of long duration it is necessary to have provisions to update the software while still at sea. If this is impossible, all updates take 1-2 months to be implemented. 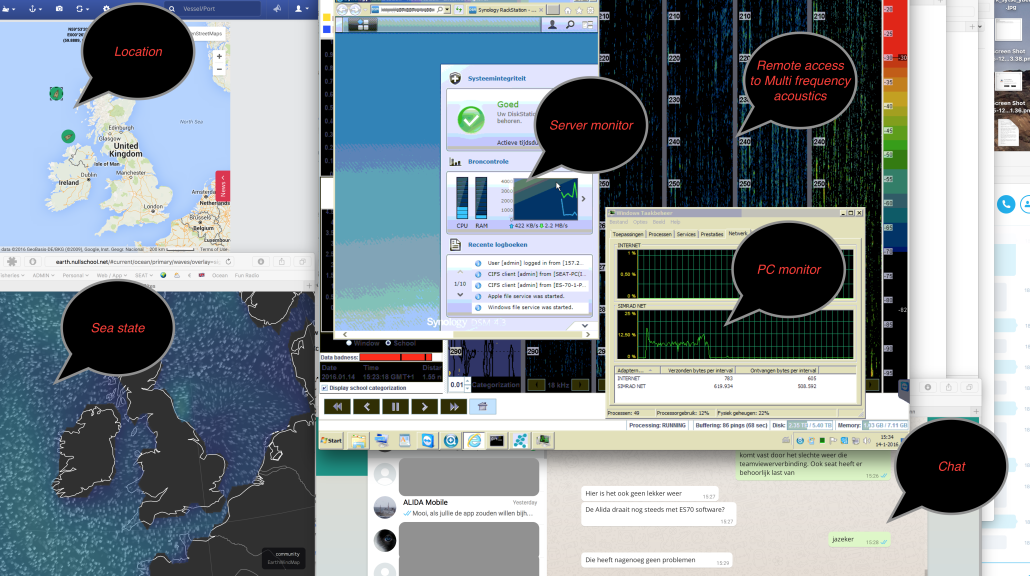 Improved horse mackerel classification
An additional fingerprint for horse mackerel has been added to the species library. A small feature that was found specific to horse mackerel in earlier years was absent in data that was collected during the first half of 2015. This means that the original fingerprint no longer matched the horse mackerel echogram. To rectify this, a second fingerprint for horse mackerel has been added to the library. Data from the last few trips of 2015 still has to be analyzed, but this development stresses the need for area and time based classification that is part of the SEAT II project activities. It also shows that the fingerprint database has to be maintained and upgraded over time. The change was first observed in the first half of the year. Since there was only one vessel that was collecting data at that time, it also showed the importance of using multiple vessels for such project: without data from different platforms there is no way of knowing for sure the change in echogram is not cause by a technical malfunction on board. Only when the same change is observed on more than one vessel can the fingerprint be updated

Lesson learned —> the realization that unexpected changes in acoustic fingerprints could either be caused by changes in the ships equipment or changes in fish appearance/behavior. It requires at least a second vessel to observe the same change to confirm it is in fact the fish that have changed, and the change does not have a technical background. 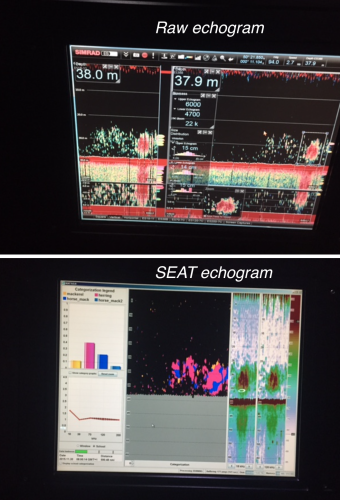 Classification for blue whiting and boarfish is added to SEAT
For blue whiting, the Institute of Marine Research in Bergen, Norway (IMR) has contributed with reference school collected by scientific vessels and one commercial vessel. testing this classification can be done from March 2016. Boarfish example schools were rarely found but a first attempt was made to build up an acoustic fingerprint in SEAT. This fingerprint will be fine-tuned during the first few months of 2016.

Lesson learned —> In order to develop a working fingerprint it is necessary that enough reference data is available. For this purpose projects using acoustic equipment need multiple participating vessels. It is also important to keep old data available to use as a source of data for development of future fingerprints. Both issues have been incorporated in the SEAT II project from the outset.